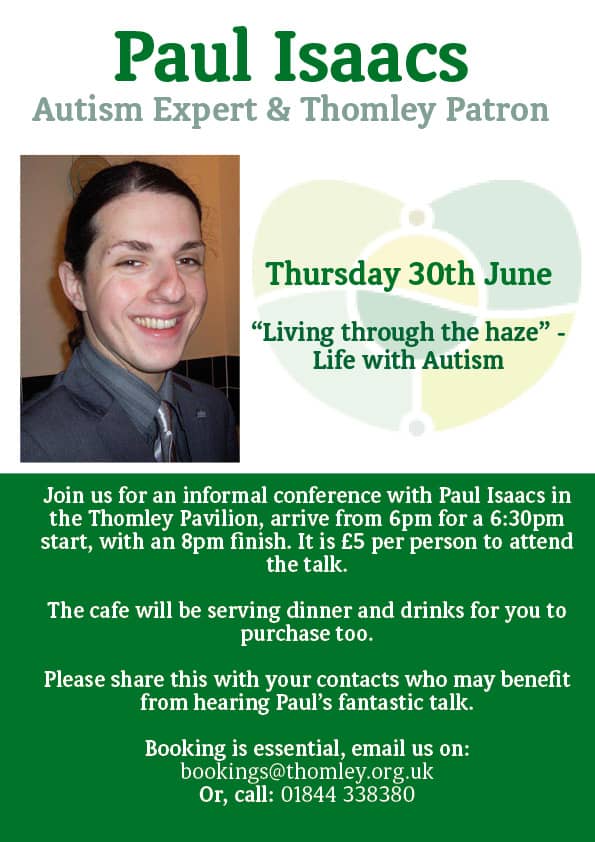 ‘Living through the haze’ with Paul Isaacs

“My name is Paul Isaacs and I have been an advocate for over eleven years. I was diagnosed with autism and OCD at the age of 25 in 2010 and later diagnosed with visual perceptual disorders and learning difficulties in 2012.

I was born in 1986 – a month premature and it was a difficult birth, fetal distress, placental abruption and brain injury. My mother thought I was deaf and blind at 6 months old and noticed delays in speech, language and motor development. I went through mainstream education and being meaning deaf, meaning blind child I could not in internalise words, I saw people, places and objects in bits and pieces and would try to understand the world around me through my body – licking, sniffing, tapping and rubbing to externalise and gain association.

I didn’t gain functional speech between the ages of 7/8 years old old it was at that point expressively of a three year old, before that my language was based around things I had watched on the television at home I was echolalic and had an idiosyncratic pattern, theme and feel way of adopting my own “language” (non-interpretive but but had an inner relevance reality) vs. the interpretive language or the world/environment around me.

Exposure Anxiety (a form of anxiety termed by the late Donna Williams) has been a great battle throughout my infancy, teens and early adulthood in which I would have compulsive retaliation, diversion responses when “self awareness and awareness of self e.g. my existence” I was made aware of. This would come out as echolalic litaines, mutism and dissociation.

The switching between the unconscious world of “sensing” in which merged with people to a more interpretive framework was a great trail for me.

In my education I was bullied and also in employment in which I was diagnosed in 2007 with personality disorders, psychosis and auditory hallucinations – this was no doubt a stress response and my nervous system trying to get a rest and cool down. It is a fact that up 70 percent of people on the autism spectrum have mental health co-conditions.

Now as an adult I have learnt to let go and rationalise the past as lessons to be learned, lessons to be shared and lessons to be reflected upon, I strive for knowledge, egalitarianism, realness and autonomy. In my free time I enjoy connecting with friends, creating artwork, poetry and introspective writings”.

Paul Isaacs ‘Sensory perception in the context of Autism’

Please donate and help us to carry on supporting thousands of disabled people every year
Donate here
Copyright © 2021 Thomley - All Rights Reserved | Charity number: 1089224 | Website by Little Bird Web Services | Thomley is a facility within Thomley Hall Centre Ltd. Registered in England and Wales No. 4297671 | Refund Policy
This website uses cookies to improve your experience. We'll assume you're ok with this, but you can opt-out if you wish. Cookie settingsACCEPT
Privacy & Cookies Policy

This website uses cookies to improve your experience while you navigate through the website. Out of these cookies, the cookies that are categorized as necessary are stored on your browser as they are essential for the working of basic functionalities of the website. We also use third-party cookies that help us analyze and understand how you use this website. These cookies will be stored in your browser only with your consent. You also have the option to opt-out of these cookies. But opting out of some of these cookies may have an effect on your browsing experience.
Necessary Always Enabled
Necessary cookies are absolutely essential for the website to function properly. This category only includes cookies that ensures basic functionalities and security features of the website. These cookies do not store any personal information.
Non-necessary
Any cookies that may not be particularly necessary for the website to function and is used specifically to collect user personal data via analytics, ads, other embedded contents are termed as non-necessary cookies. It is mandatory to procure user consent prior to running these cookies on your website.
SAVE & ACCEPT
Back To Top